In 1987, Scott earned a Doctorate in Jurisprudence at the University of Oregon. After passing the Oregon State Bar and a year long judicial clerkship with the Federal Court in Las Vegas, he established a law practice on the Oregon coast in Lincoln City, where he also ran a very successful theatre program for youth and families which earned him a Coastal Communities Cultural Center’s Annual Award for Commitment to Excellence in the Arts.

In 2003, after sixteen years of practicing law, Scott and his family headed to Eden Theological Seminary in St. Louis, MO where he earned a Masters of Divinity degree.

Scott previously served as the pastor at Riviera UCC in Palm Bay, Florida for seven years, where he also ran a family and youth Shakespeare Theatre Company.

Known for thoughtful and fun sermons Scott challenges the listener to center on Jesus’ call to embrace not only a loving God, but all people especially those others might place on the margins or think of as sinners. His sermons tend to follow the Revised Common Lectionary readings and are scripture based.

Scott’s ministry includes not just sermons on peace and justice,  but also work on peace and justice issues, especially those relating to LGBTQ+, Women, Blacks, Indigenous,  People of Color and the poor.   In 2012 he received a distinguished Lilly Grant Sabbatical award to study peace with peace educator and Peace Village founder the Reverend Charles Busch.  In 2014, his first summer in Ohio, Scott started Ohio’s first Peace Village, a children’s interfaith peace camp which he continues to co-direct.  In 2016, while working on overcoming racism, the United Church of Christ national news covered some of his interfaith civil rights leadership including the formation of an ongoing Overcoming Racism class and an annual interfaith Martin Luther King Jr. Service.  In 2018 Scott was locally honored with the 2018 Spirit of Vision award for his civil rights efforts, and also served as the keynote speaker at the Legacy Committee, Kenyon College and Mount Vernon Nazarene University Martin Luther King Celebration.  He has also served as a panelist at both of the colleges’ conversations on racism and at Miami University’s “Better Together Week.” In October of 2020 Scott’s continuing efforts with the interfaith Overcoming Racism course once again made the UCC national news. In the summer of 2020 Scott led the gathering of an interfaith group of clergy in a vigil in our church courtyard before they marched in a George Floyd Protest. A photo of Scott and his wife, Nancy, in that protest was picked up by the Associated Press and published around the nation (see below). The year 2021 started off with Scott on a panel with two other pastors and the mayor in a webinar conversation about faith communities’ responses to race issues (here is a link to that webinar: https://www.youtube.com/watch?v=Rsd7H2RP83A&feature=youtu.be).

In 2019 Scott led our church theatre ministry, Community Family Players, and The Winter Sanctuary (a local shelter for those experiencing homelessness where Scott serves on the board ) to produce the play, A Christmas Carol, which he directed and helped not only provide an uplifting play that connected youth to the community,  but also netted over $31,000 for the shelter.  Scott’s sabbatical in 2021 focused in good part on developing a script of A Christmas Carol for future productions, as well as planning the 2021 production of that show which in December entertained sell out crowds, connected youth to the community and this time raised over $50,000 for The Winter Sanctuary. These efforts earned Community Family Players recogniton by Central Ohio’s Theatre Roundatable with a prestigious Theatre Innovation Citation “presented to an innovative arts and cultural project or initiative that helped lift up or provide relief to others in the community.” (Scott’s picture with the award below and an article on the citation can be found at this link:  https://www.broadwayworld.com/columbus/article/Photos-Inside-Theatre-Roundtables-CENTRAL-OHIO-THEATRE-ROUNDTABLE-ANNUAL-CELEBRATION-20220517?fbclid=IwAR2015KmWcCX9FofpWJhPsdeiMaRfhvp_zA-TvY5fXBXt1jLwkufUKFRSR8 )

Scott’s theology is progressive and Bible-based. He takes very seriously Jesus’ supreme commandment, to love God, and to love our neighbors, and Micah 6’s claim that what God requires of us is to seek justice, love kindness and walk humbly with our God. Another set of verses he relies on a lot in ministry is Matthew 25: 31-46 where we learn the Son of Man is in the least among us.

In the church’s in-person services Scott begins with the time honored litany that “God is good all the time” and ends the services with the blessing to “Go in peace knowing that you are loved and that you matter much.” In between there is singing, prayer, thoughtful messages, humor, and lots of love.

In addition to working on worship, Scott contunues to work on justice and peace issues, and to teach and provide care and compassion to those in need.  He also leads a UCC clergy support group and a local Overcoming Racism project. He serves on the board of The Winter Sanctuary, the board of the Knox Alliance for Racial Equality (KARE) and the board of Theatre Roundtable.  Scott has also recently been working with others to bring an LGBTQ+ support group, to the area.  He has served on conference/association Church and Ministry committees and has successfully mentored UCC ordinands in Florida and Ohio.  He also helps serve Hot Meals at our church to those in need and finds time to run Community Family Players.

Scott and Nancy have four wonderful grown children, a dog and two cats. They make their home in Mount Vernon where they love to walk, explore central Ohio, take photographs, read, garden and putter around the house. And sometimes when no one else is around, Scott plays the didgeridoo.

Scott began his call at First Congregational United Church of Christ on November 1, 2013. 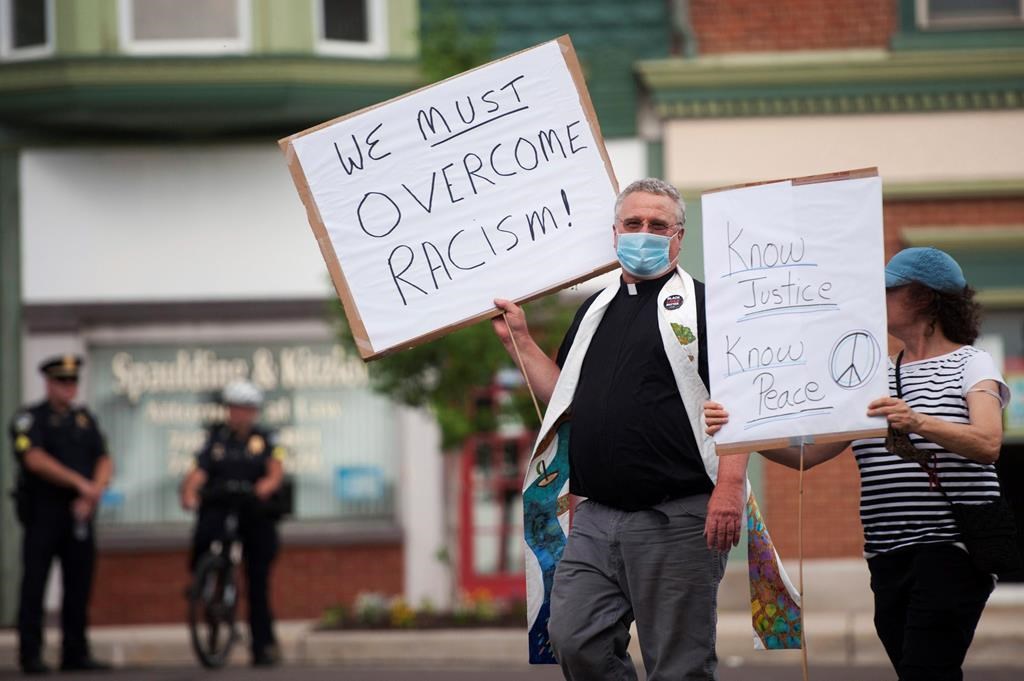