A History of Love and Activism

Our first pastor, Rev B.W. Higbee was known as spiritual, evangelistic and militant for Christ’s love. So, it should come as no surprise that we were founded as an anti-slavery church in 1834. Our present building was built in 1868 featuring two prominent stained-glass windows depicting African Americans as Biblical characters and dedicated to the anti-slavery movement. In our over 180-year history we have never shied away from doing what is right for Christ’s love. We’ve marched for civil rights, stood up for peace, fought for equality of women, been at the forefront of LGBT rights in the county and helped those in need. We take very seriously Jesus’ supreme commandment to love God and to love our neighbors. 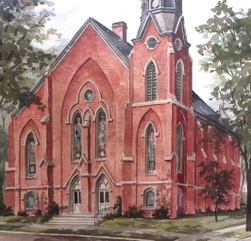 Our church building is on the National Historic Register not only because it is old (built in 1868), but also because it is an architectural treasure. Stop by and visit our stunning sanctuary. From the high arched ceiling to the splendid stained-glass windows, it is aesthetically pleasing. The Spirit’s presence is palpable, exuding a deep sense of peace and Sacredness. It is truly Holy ground. First Congregational has been filled with the Spirit from the start and has been overflowing ever since.

On the Historic Walking Tour of Mount Vernon

When the local school district put together a walking tour of Mount Vernon, our church was one of the historical places they chose to include.

History of the United Church of Christ

A video about the history of the United Church of Christ: “Yesterday's Visionaries, Today’s Voices.”

Our Beautiful stained-glass windows were installed during the leadership
of Rev. William J. Turner who served the church from 1893 to 1898.
Many of them were dedicated in memory church members. 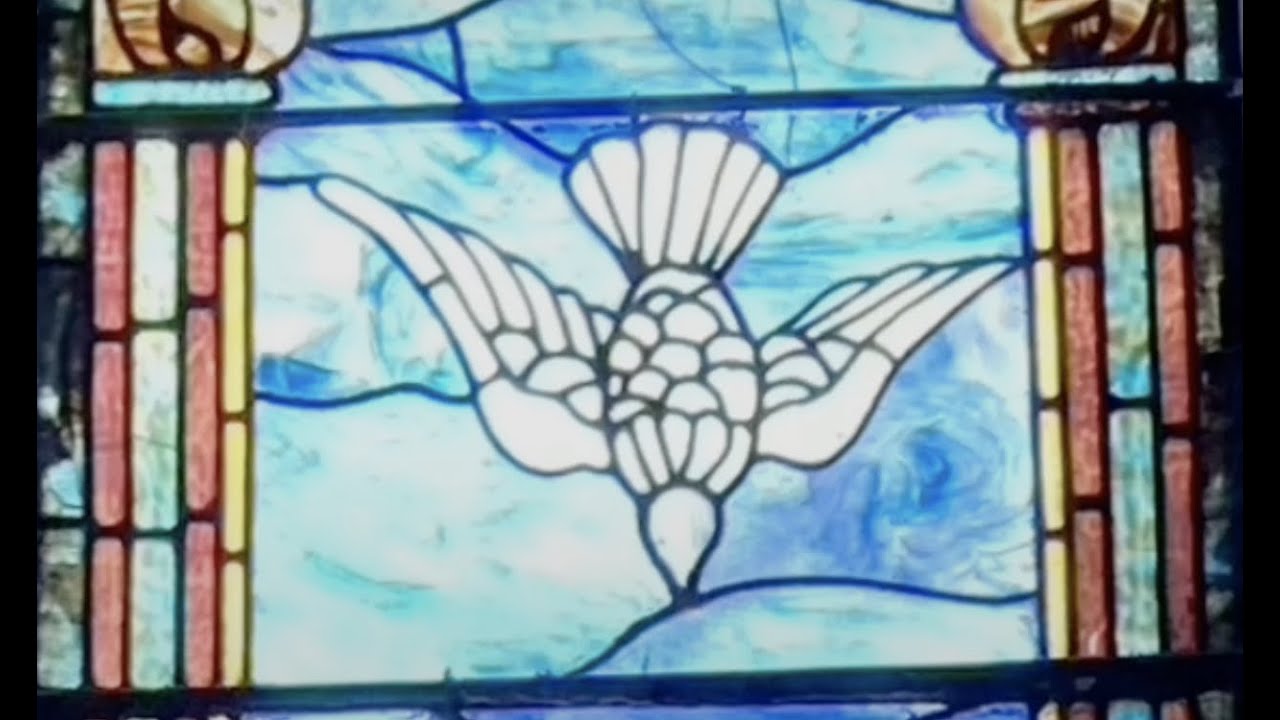 One of our members, Cliff Davis was inspired by this window to write the words and music to this song. 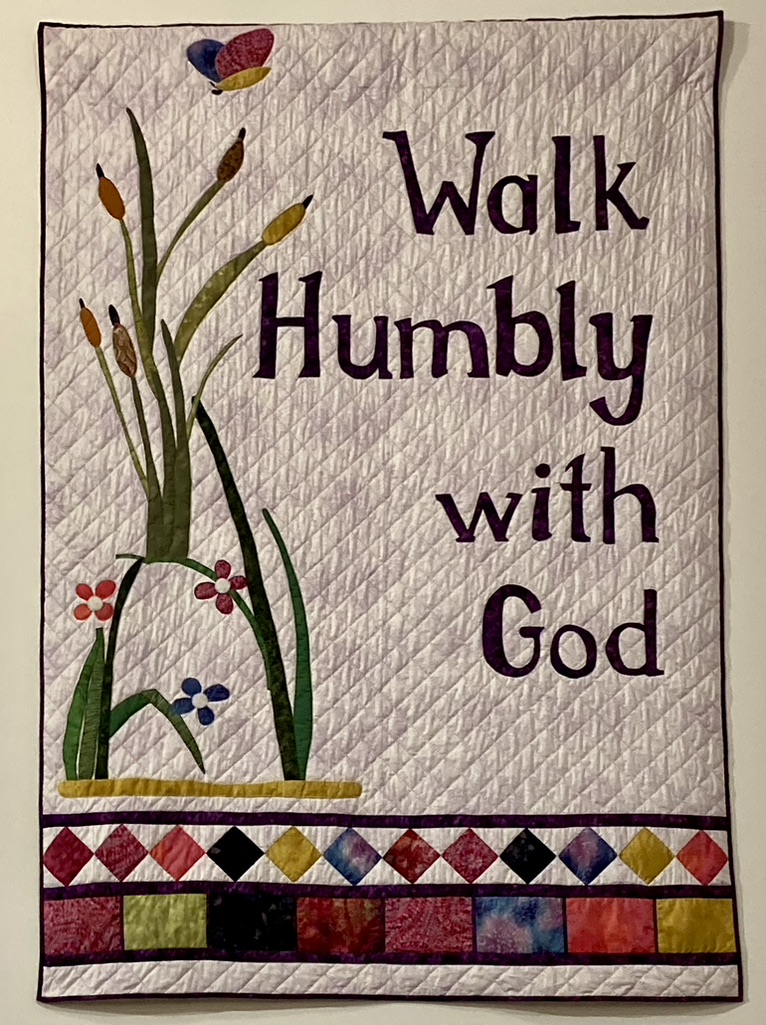 In 2011, our quilting group completed these two banners that we proudly hang in our sanctuary. 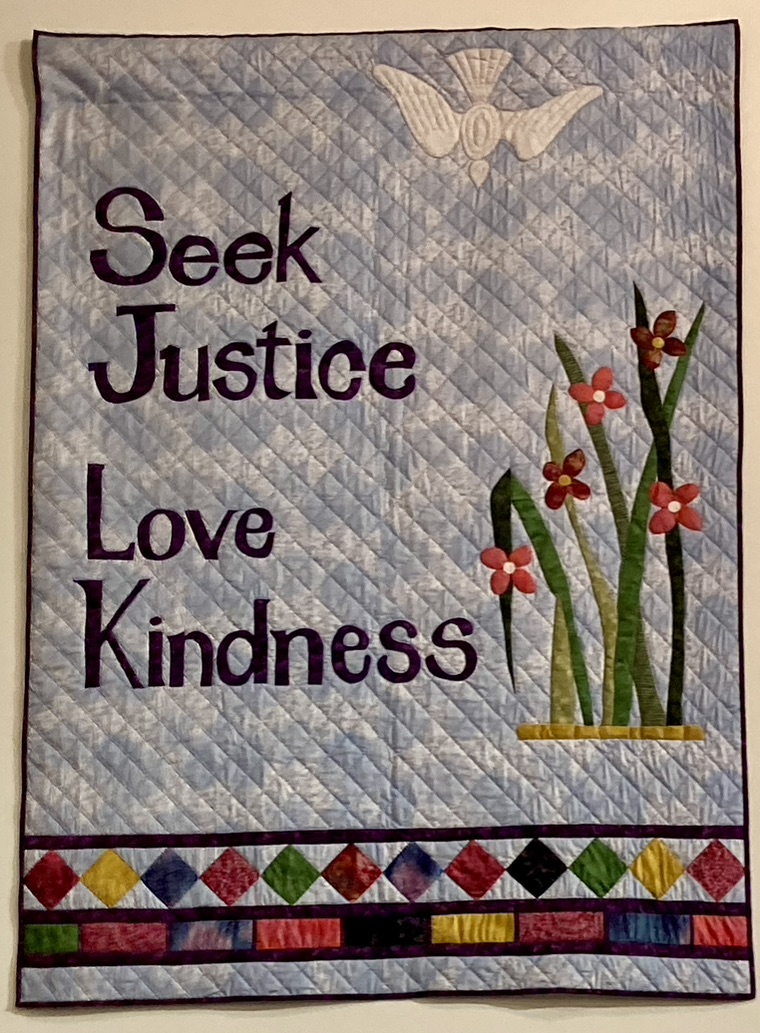 We stand on the shoulders of those who have gone before us. We are instructed, shaped, formed and influenced by our past – and the history we create shapes and influences those in the future. So, it’s good from time to time to look back and take in the path and the people that traveled it with God and Jesus to bring us to this very day. God and Jesus, of course, have influenced the arch of our history most of all.

We started as an anti-slavery church. A huge part of our first missions and ministries was to work and to strive for the freedom of American slaves. The first minister of the church born in the throes of our anti-slavery beginnings was Benjamin Higbee. There is no known photo of him but a note on our hall wall says this about him. Rev. Higbee is the only pastor we do not have a photo of.

Our church began in barn near Bangs on July 26, 1834. Our first church building in town was near where the library is now. We occupied that long gone place from 1835 to 1867. We do not have a photo of that building but I do have the photos of the other pastors who served in that location.

In that church we began as “The Free Presbyterian” until we became The First Congregational Church in 1849. The church did not just oppose the injustice of slavery, anti-Slavery advocates were also often involved in Temperance and Suffrage movements– and First Congregational Church embraced both. In the mid-1800s an early women’s rights activist, Amelia Bloomer, attended the church (“bloomers” are named after her). Lucy Stone, another Suffrage activist gave a lecture in the church on women in the workplace.

In much of the last decade, we were in the first building, from 1860 to 1865, our focus included gathering and preparing large quantities of supplies for Northern Armies during the Civil War. 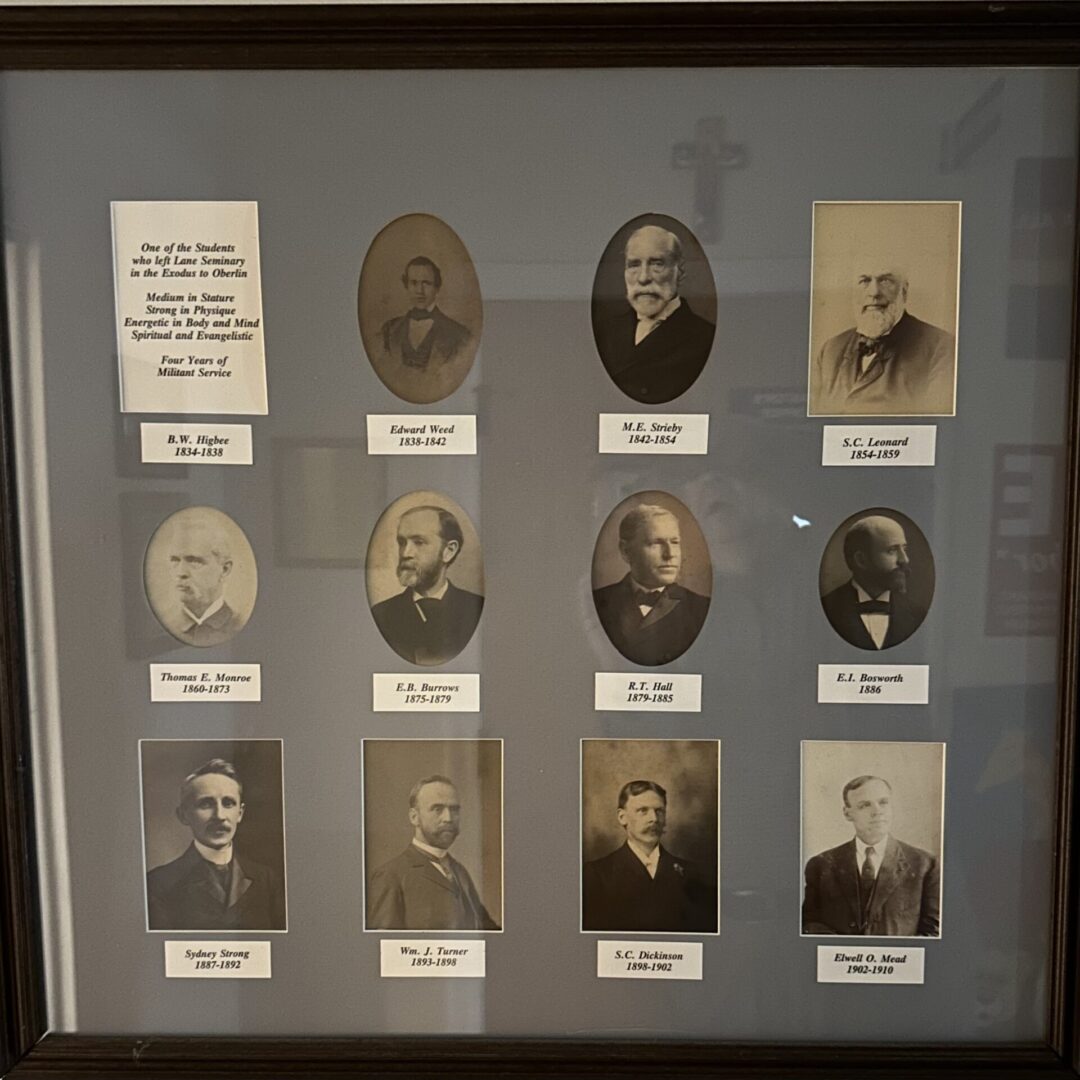 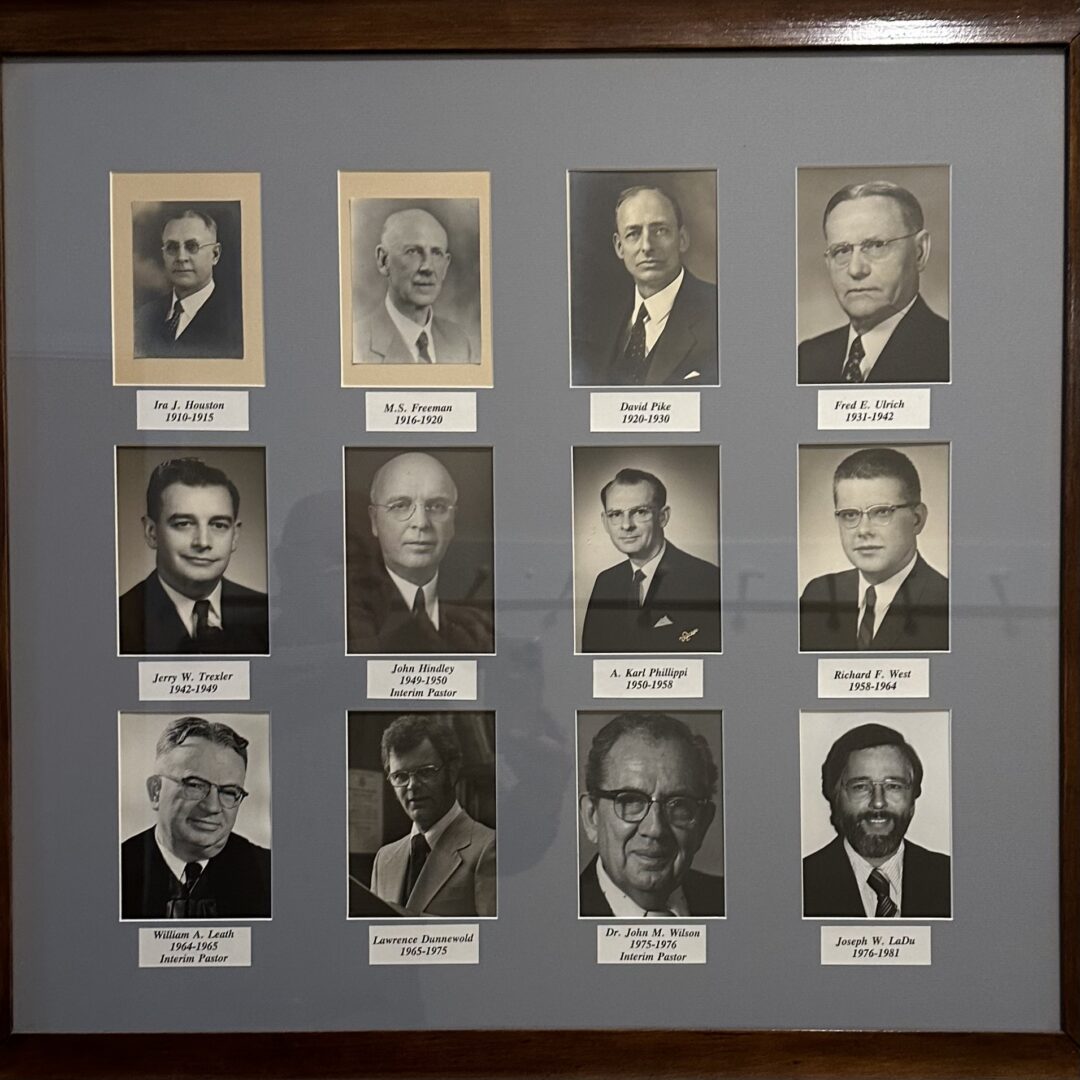 Shortly after the Civil War ended, in 1867, we sold the first church structure and moved out and into, believe it or not, the library, which used to be right across the street from here. We were in the library for a year while the new building – the current one we are in (200 North Main Street) was being finished.

It took three years to build this building – after that one year in the library, we moved into this place in 1868.

Although there is a 1950s rendering in the parlor of the early church showing a brick facade, as well as notes in the archives suggesting that stucco did not go over the bricks until after 1916.

Early photographs of the church actually suggest perhaps that stucco was on the front of the building earlier than 1916 the year the spire was removed.

Most of the pictures do not have dates, but we know the spire came down in 1916. So, all the shots with the spire were taken over a hundred years ago. Just look for the spire in these photos — it was one of the highest land marks in Mount Vernon.

In 1916, there was a fire in the spire caused by lightning and we decided to take the spire off and remodel a portion of the tower, adding some windows and changing the steeple tower roof line. You can see there were also some pyramid stacks of blocks on the four corners of the tower and a couple of points elsewhere.

Eventually the pyramids on the tower came down but if you look on the outside of the building you will still see some elsewhere. The tower has had different painting accents. One time the church front and tower had ivy on it.

Here are some highlights of the last 7 years. We fixed the social hall. We have a new floor and John Reiss fixed the walls. We fixed the bell tower and got the bell ringing again. We have a theatre ministry-that cool Christmas Eve skit, but we also did full-length productions of Godspell and A Christmas Carol. We added an Animal Blessing service each August. We have worked hard on justice issues, because of this church leadership and work on racial justice issues your pastor represented the church as keynote speaker in 2019 and was given a civil rights award–for our work together. We refurbished our sanctuary with new heating/air-conditioning, new sound system and all new paint and wall repair. We have held 5 Peace Village camps for children. What blessing this church is to one another, to the community and to God. May we add more good history to the community AMEN. 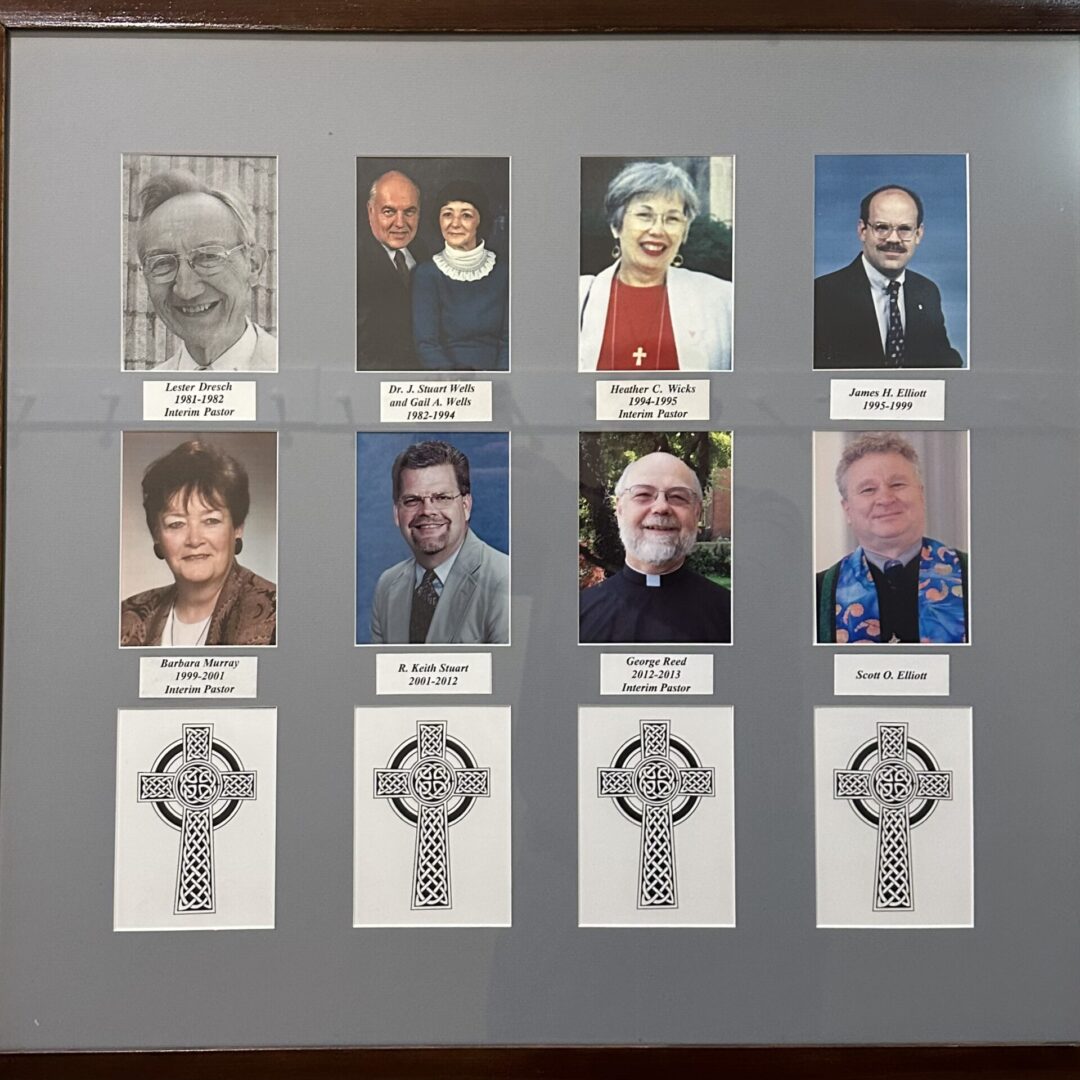 Mr. Dickinson’s resignation came in April 1902, and Rev. Elwell O. Mead came to the pastorate in December of the same year. At the annual meeting in January, 1903, Mr. Mead asked that a committee be appointed to revise the constitution, By-laws and Creed of the church. He with Mr. B. B. Williams and Mr. C. F. Colville were appointed. In October, 1903 the new manual as prepared by the committee was adopted by the church at a regular business meeting. Mr. Mead also wrote a very interesting historical sketch of the church which was incorporated in the new manual. Electric lights were placed in the church and other needed improvements made during his pastorate. In the winter of 1908, the church united with the other Protestant churches of the city in making preparations for a great revival meeting. A large tabernacle was erected on the court house lawn and the Rev. Milton Lyons, a noted evangelist was secured. At the close of the meetings a large number united with the church, but for some reason but a few seemed to grow into the life of the church and the results were not of much permanent value. In January, 1910, Mr. Mead tendered his resignation after seven years of faithful service. He was a close student of the Bible, having broad and scholarly views of its teaching which he ably set forth in the pulpit.
After a short interim Rev. Ira J. Houston received a call and came to the church June fifth of the same year. The old parsonage on North Main St. was now sold and the present one on East High St. was purchased. In June 1911 the Presbyterians were invited to join with the church in union meetings while they were rebuilding their house of worship. The invitation was accepted and the churches met together for one year. During this pastorate the Congregationalist and Advance were placed in the Public Library and Y. M. C. A. In August 1915 Mr. Houston having received a call to a larger field of service presented his resignation to the church. He had given five year of earnest work and formed many pleasant associates. He was succeeded by the Rev. M. S. Freeman who was called to the pastorate in January 1916. During his stay the church was given many needed repairs. The outside being transformed with stucco work and a tower replacing the original spire which had been struck by lightning.
Mr. Freeman was a strong and interesting preacher and also took active part in the work of the Y. M. C. A., Red Cross and all civic affairs. His resignation in 1920 was felt as a distinct loss, not only to the church but to the whole community.
The Rev. David Pike came to the church in September of the same year and has been an untiring worker and an excellent pastor and preacher. Hoping to increase the attendance and interest in the evening service Mr. Pike introduced the first moving pictures to be given in a Mt. Vernon church.
The ninetieth anniversary of the Church was celebrated on Sunday and Monday, September 28th, and 29th, 1924. The Rev. Marston S. Freeman, serving the Congregational Church of Chattanooga, Tenn., spoke on Sunday morning, taking as his subject “The Spiritual Under-currents of Ninety Years Ago.” The speaker in the evening was the Rev. McIlyar B. Lichliter of the First Congregational Church of Columbus. His subject was “In The Wake of The Mayflower.” There was a special service in the Sunday School, in which Mr. Zenno Taylor gave an address honoring the former members of the Church whose portraits hang in the vestry.
On Monday evening a re-union banquet was held at which about 225 persons sat down. The Reverends Elwell O. Mead, Selden C. Dickinson, and Marston S. Freeman were present and spoke in happy vein concerning their memories of the Church. Other speakers were the Rev. Edgar S. Rothrock, representing the State Conference and Rev. Hugh Wayt who gave the greetings of the local Ministers Association. Mr. Henry Cooper read an historical poem which was highly appreciated.
Notwithstanding continuous rain, the meetings were all finely attended and the whole celebration was characterized as one of the most successful and happy events the Church has known for many years. As part of the anniversary celebration Mr. Hal Eggleston, Mrs. W. S. Sperry and Mis Florence Westlake were appointed to prepare a new manual of the Church.